The Liberal National Government is investing $28 million for the development of four new urgent care centres in Perth that will help ease pressure on emergency departments, and provide greater choice for patients.

The new centres located in Cannington, Midland, Mandurah and Osborne Park will handle urgent, but non-emergency patients who would normally go to hospital emergency departments for treatment.

Member for Canning Andrew Hastie welcomed the announcement as part of the Morrison Government’s ongoing support for health services in Mandurah.

“For a long time locals in Mandurah have been concerned that the emergency department of the Peel Health Campus is insufficiently resourced to cope with our growing population. I share their concerns. Our doctors and nurses do a great job, but they’re overworked. Our community campaigned hard over the past 12 months to get a better deal for the PHC. Earlier this year the Morrison Government came through with a record $25 million to significantly upgrade the hospital.

“However there are more ways to address this issue. The announcement in last night’s budget that an Urgent Medical Care Centre will be established in Mandurah is huge news for our city. These centres significantly reduce the pressure on emergency departments by creating a facility that can attend to urgent but non-emergency patients.

“This is another way that the Liberal National Government is improving essential services for our community.”

“Together, the seven urgent care centres; four new and three existing, will be able to treat 231,000 patients a year. Approximately one third, or 77,000 of these patients, would normally present at public hospital emergency department.”

St John WA, CEO, Michelle Fyfe said that this funding to run a four year trial of Urgent Care Centres was a significant decision by the Federal Government and that they believed it will have a long-term, positive impact on the Australian pre-hospital system.

“Based on our nearly three years of evidence in running three Urgent Care centres, we’re confident this will make a real difference. This trial will provide data to conclusively prove the positive impact that

Urgent Care has on the health system.”

Chairman of St John WA, Shane Lesley welcomed the funding and said the expansion of Urgent Care centres throughout Perth will strengthen the health care system.

“We are confident that the entire system of General Practice, after hour’s General Practice, Urgent Care and Emergency Departments, all working together, will deliver the best outcome for the whole community.”

This funding compliments the additional $3.5 billion Western Australia will receive for public hospitals as part of the new hospitals agreement.

Since coming into Government in 2013, the Liberal National Government has increased funding to Western Australia for public hospital services from $1.4 billion, to an estimated $2.2 billion this year.

We are committed to improving health services throughout Australia and building a world-class health system.

Improving Heart Health in our Community

The Morrison Government will ensure that residents in Serpentine Jarrahdale at risk of heart disease receive timely and appropriate medical advice with the creation of a new Medicare item for heart health checks.

“Our Government is committed to tackling Australia’s biggest killer – heart disease. One Australian dies of cardiovascular disease every 12 minutes, with one Australian experiencing a heart attack or stroke every five minutes,” Mr Hastie said.

“This comes in addition to over $10.5 billion the Liberals have invested to make over 2000 medications more affordable under the PBS. We are delivering better, more affordable health care in the Peel region.”

“The independent medical experts at the Medical Benefits Schedule Review Taskforce will also conduct a review with the potential for further development of this new Medicare item,” Minister Hunt said.

Anyone who is concerned about their heart health should always ask their GP for a check-up. Currently there are a range of Medicare items that cover services and tests where people may have heart disease or are at risk of heart disease, including:

Since 2013, the Coalition Government has provided $662.2 million for research into cardiovascular disease.

Fighting for the Peel Health Campus

Since its opening in 1997, the Peel Health Campus has remained largely unchanged.

But over the past 20 years, our region has more than doubled.

That's why I've fought alongside the Mandurah community over the last year to upgrade the hospital. 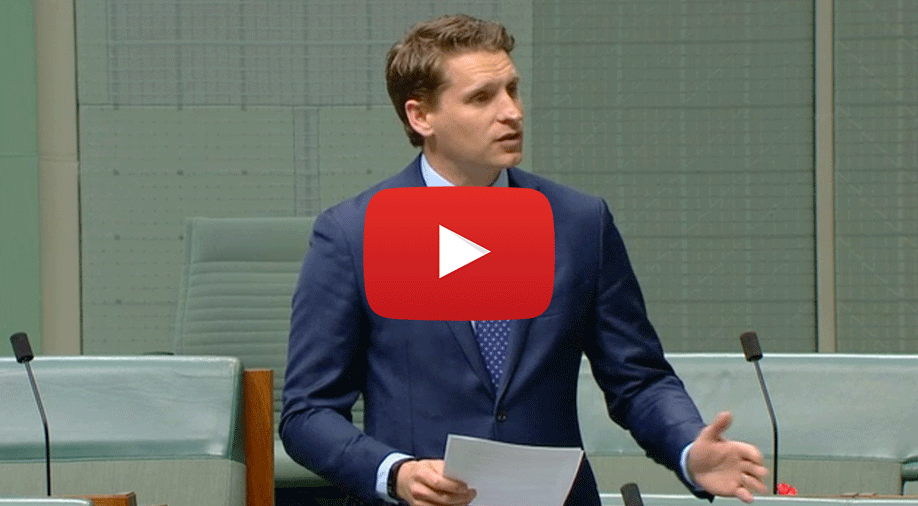 After months of petitions, letters, meetings, yard signs and a rally, our community had a huge win.

The Morrison Government committed $25 million to upgrade the Peel Health Campus. That money will be used to:

This is just some of the work we are doing for support health services in Mandurah and the Peel region. We have also delivered:

But there is still much to do. WA Labor must come to the table with a serious long-term plan for the Peel Health Campus and for the health of our region. As a state government, that's their job.

Patients in Mandurah and the Peel region will now be able to access lifesaving scans for cancer, stroke, heart and other medical conditions, with the Morrison Government announcing a new MRI licence for SKG Radio.

This MRI licence means locals will be able to access a Medicare rebate for an estimated 3,719 services a year – saving lives and reducing the costs for patients.

“This is really exciting news for our community,” said Member for Canning, Andrew Hastie.

“Thanks to this investment by the Morrison Government, patients across the Peel region will have access to eligible bulk-billed MRI scans. They will no longer have to pay hundreds of dollars for the service.”

“Families shouldn’t have to worry about whether a trip to the doctor will require an expensive MRI they can’t afford,” said Mr Hastie. “We’re making healthcare more affordable in Mandurah.”

“Patients will receive the Medicare-covered MRI services from March.”

An MRI is a commonly used medical scan which gives a detailed view of the soft tissues of the body such as muscles, ligaments, brain tissue, discs and blood vessels.

It is used by doctors to diagnose and monitor a number of different medical conditions including cancer, trauma and sporting injuries.

Minister for Health Greg Hunt said the Liberal National Government is helping Australians stay healthy and keeping down the cost of healthcare for families.

“Our plan for a strong economy means we continue to deliver record funding for essential services such as Medicare, public hospitals and life-saving medicines,” Minister Hunt said.

“Not only will our new Medicare support ensure patients get better treatment and save money, it will also cut down the amount of time patients travel to get a scan.”

“Our investment in MRI licences of over $375 million over the forward estimates for 50 new locations around the country delivers on the Government’s commitment to improve access and outcomes for patients.”

“Unlike Labor we have also committed to reduce the cost for patients by indexing targeted diagnostic imaging services including mammography, fluoroscopy, CT scans and interventional procedures.

“Under the Liberal National Government, Medicare spending is guaranteed and increasing every year from $24 billion in 2017–18 to $28.8 billion in 2021–22 to support health care for every Australian.”

“The Government is committed to delivering improved health services which includes increased hospital funding with an extra $8 billion for hospitals taking it to $29.5 billion over five years,” Minister Hunt said.

I'm asking for your help in the fight for the Peel Health Campus.

It's been more than 130 days since the Mandurah community rallied outside the Peel Health Campus, calling on the State Government to improve our overworked hospital.

Since then, the WA Labor Government has done nothing.

So Zak Kirkup and I are holding the State Government to account.

We've made signs for you to display in your front yard, calling for improvements to the Peel Health Campus. Each sign holder will also get a set numbers, to stick on their sign every ten days the State Government fails to deliver. 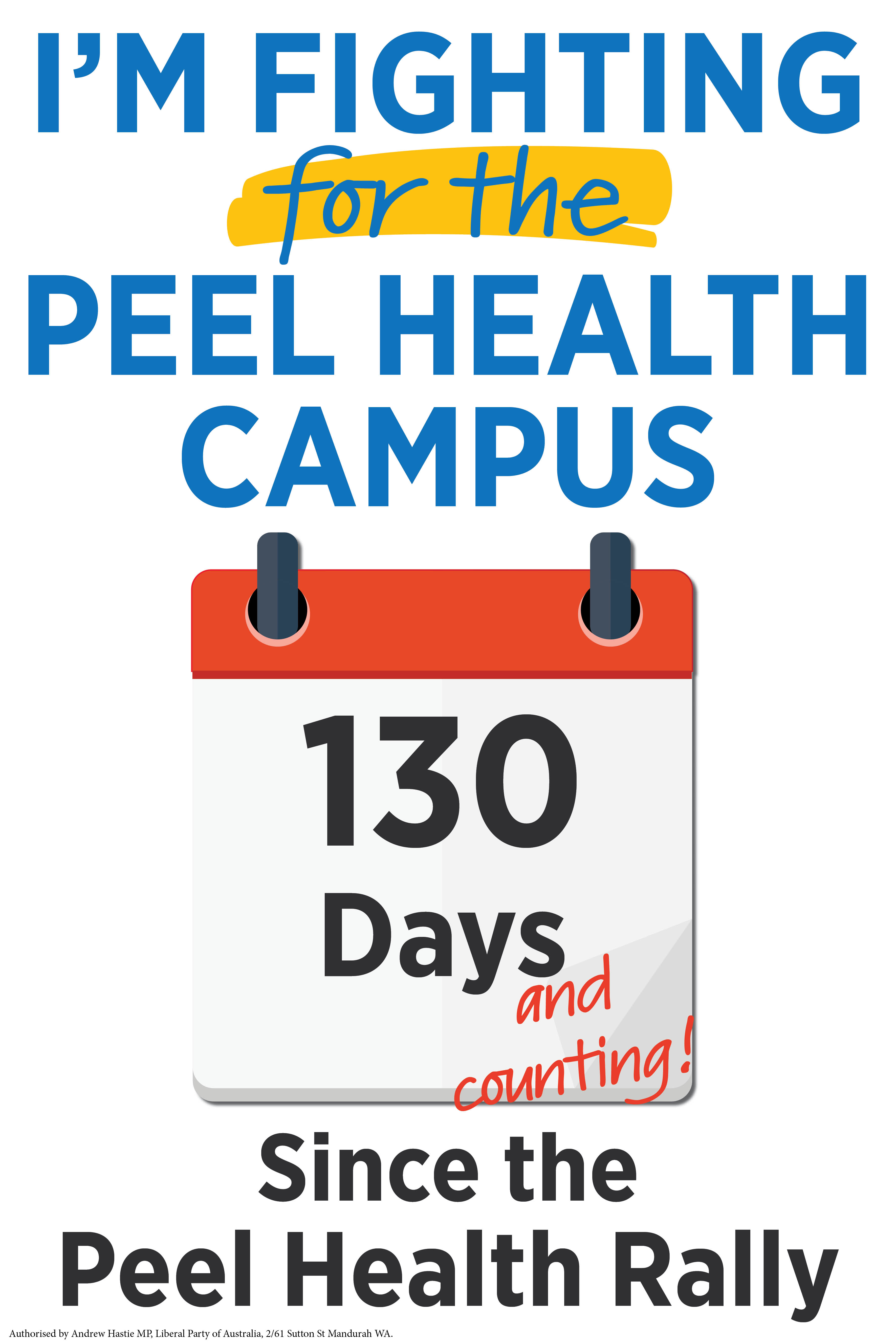 Together we are going to keep count on the wait for a better hospital, and send a clear message to the WA Labor Government that Mandurah demands action.

If you can put a sign in your front yard, please visit my office at 2/61 Sutton St, Mandurah and pick one up. You will also get a set of stickers, and a wooden stake, if necessary. We can even provide an assistant if you need help putting it up!

The State Government needs to understand that we demand action. It’s been more than 130 days, but the people of Mandurah haven’t forgotten. I hope you can join me in this fight.

The Turnbull Government is determined to introduce a drug testing trial in Mandurah to help residents get the help they need to get off drugs and into work.

Under the trial, 5,000 new recipients of Newstart Allowance and Youth Allowance (other) will be tested over a two-year trial period across three locations: Mandurah (WA), Logan (Queensland) and Canterbury-Bankstown (NSW).

The additional $10 million in funding will provide:

Mr Tehan said the Government had recently re-introduced its drug testing trial legislation into the Parliament and called on Labor and the crossbench to support it.

“The Turnbull Government created more than 1,000 jobs a day last year and we want every Australian to be in a position to take advantage of the employment opportunities available,” Mr Tehan said.

“The best thing we can do is help someone off welfare and into work. The drug testing trial is about helping people to help themselves get a job.

Mr Hastie said the trial had great potential for Mandurah.

“This trial is a unique opportunity for Mandurah. Newstart and Youth Allowance are designed to help people while they look for work. But if people are struggling with drug abuse, their chances of getting hired and holding a job are much lower,” Mr Hastie said.

“The drug testing will identify those people who need help, and the treatment fund will make sure those people have the resources they need to get drug free and job ready.

“No one will lose their welfare out of this program, no one will be worse off if they do the right thing. But if you refuse to take a drug test, you’ll find yourself in trouble. That’s no different to many jobs. Many Canning workers take regular drug tests for their jobs. Why should it be any different for welfare recipients? This is a very reasonable expectation, especially as many Australians support job seekers on welfare through their taxes.

“Labor’s opposition to this program is purely political.”

The Turnbull Government has engaged more than 170 stakeholders on the drug testing trial at more than 60 forums around Australia, including the three trial sites.

The Government will further engage and consult with local stakeholders in the three trial locations prior to implementation.

The number of income support recipients in Western Australia who tried to claim drug or alcohol use as an excuse for not meeting their mutual obligations increased by 475 per cent over five years, with 1,075 applications submitted in 2017.